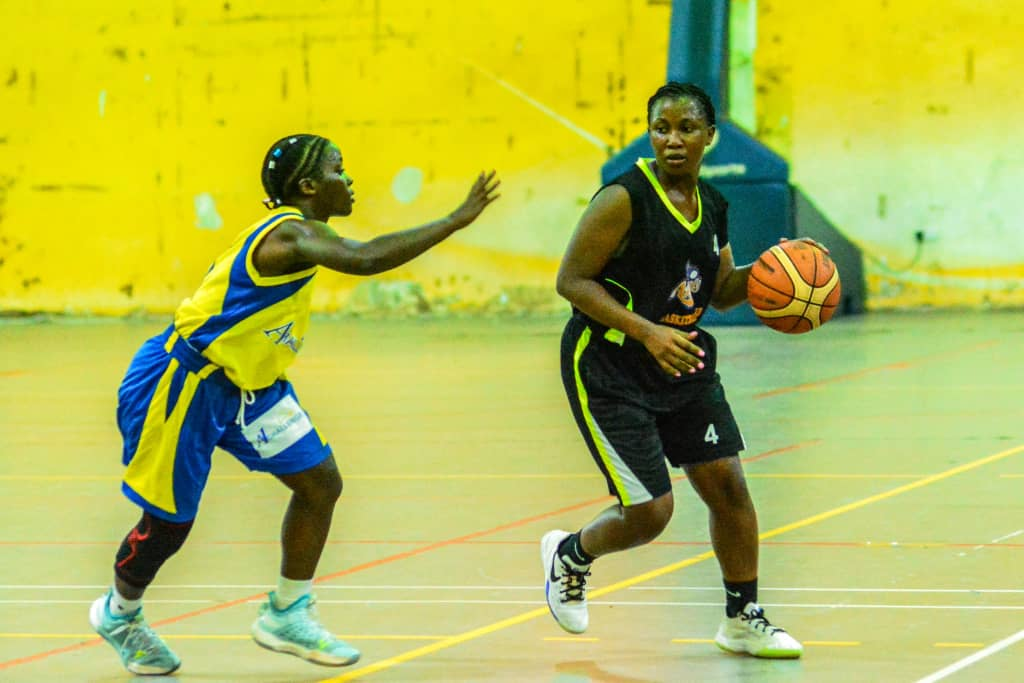 The Angels, despite a shaky regular season, had the game in their hands and managed to push themselves to victory.

The Leopards however might have lost their regular season mojo if the playoff game is to be compared to all the other games they have played.

The cheering Indoor Arena had all that it took for the fans’ side as the Angels and the Leopards clashed.

The first period of the game was tight on as the angels had a quick response to the game with Elizabeth Akol with a 3 pointer which was time for the leopards to reassemble and respond too positively with a layup from Becky long, returning with another layup Becky Longom had started to scatter the Angels’ defense as Ruth Letaru came in with a jump shot for 3 having the leopards lead by 4 points.

Clearly, the Angels seemed to be pressed at this time of the game since the Leopards have it all on their tips.

Diana Komugisa with a jump shot for two brought back the angels to the chase, followed by Grace Kwarisma’s lay making a tie that was broken by Ruth Letaru followed by another layup from Nakalembe Asinah having the game at 11-8 with the Leopards in the lead.

Stella Maris Lunkuse to the rescue with 3 points pulled the Angels up as the Leopards relied on Catherine Haruri who pinned the Angels with another free shot having it at 13-10.

A few minutes to the end of the quarter, the Angels’ chase was still on as they managed to bottle the period with Elizabeth Aguti’s three-pointer and Peggy Nabwire’s layup having the scores turn around to 15-13 with the Angels in an early lead with two points.

The Leopards had a wake up call as they also had the upper hand on the quarter and managed to hold the Angels down at 15-12 and subsequently 28-27 at half time.

A tight third quarter however waited for the leopards who barely could finish it all since the Angels were getting more fired up by the moment.

This however  could not stop the Leopards from accumulating the points  they needed to finish the quarter ending at 22-21 but one would say the Angels had turned on power saving mode and were up to something.

The final quarter was redemption time for both teams and having the Leopards with one hand on the victory, was a light grip for the Angels who all wanted their hands on the victory too.

Elizabeth Aguti opened up fresh again for the Angels with a floating jump shot followed by a free shot as Namirimu of Kcca also came through with a layup to level it up.

The tables had already turned on the leopards who looked so exhausted, Stella Maris will a free shot pushing the Angels to 61-58 Martha Soigi come through with 3 points from free shots as the Lunkuse and Aguti dual continued to punish the Leopards having it all end at 61-70.

Kcca’s Martha Soigi with 12 points and 9 rebounds was the only player with a double-figure score.

Will the Angels continue to dominate the series?