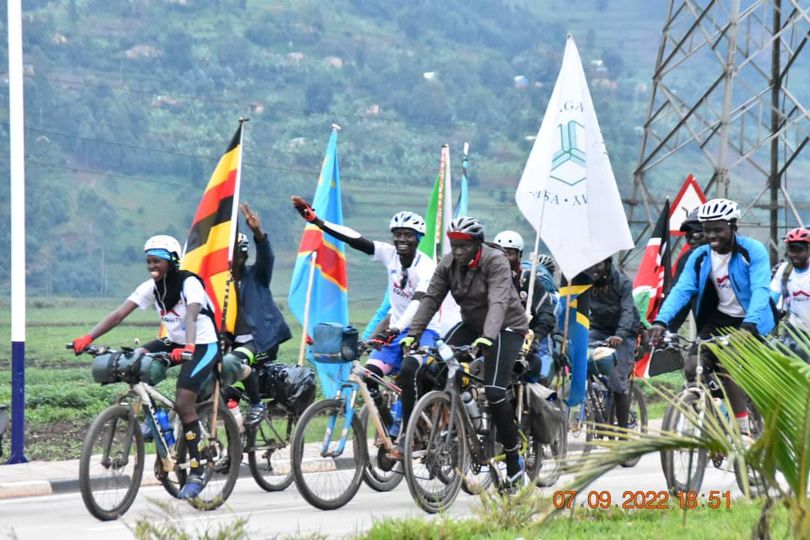 The Great African cyclists that rode into Uganda on Wednesday 7th of September have now marked three days in the country touring the different parts of the country on a cycling tour which is in its fifth edition.

The cycling tour comprises 35 cyclists representing their respective. They commenced the tour on August 1, in Mombasa, Kenya and have so far passed through Arusha, Dar es Salaam, Dodoma in Tanzania before taking to Bujumbura, in Burundi.

According to  Rt Hon Rebecca Alitwala Kadaga, the first Deputy Prime Minister and  Minister of East African Community Affairs who witnessed their arrival says there will be activities like tree planting on the way.

“It was a breathtaking moment to witness the arrival of the Great African Cycling Safari, at Katuna border en-route to Busia via Kampala, they are riding for integration for 55 days throughout the countries of East African Community they will plant trees on the way”

The cyclists  were yesterday led by the Equity Bank Head of Treasury Simon Muyobo, Head of Marketing Clare Tumwesigye and Kabale branch Business Growth & Development Manager, Jonathan Sunday as they made their way into Kabale town.

These cyclists taking part in Great East African Cycling Safari 2022 started their tour with Kampala, rode to Kabale and then rode to Fort Portal.

The tour brings together East African regional footprints with a focus on inter country trade. It also aims at promoting the goals of the EAC and promoting inter-country trade