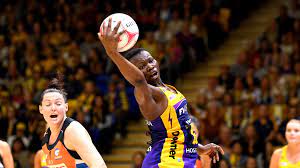 Peace Proscovia She Canes Captain has renewed her contract with the current Netball Club Surrey Storm in the United Kingdom.

“I am humbled for another year with Storm. It is an opportunity I will always treasure. I am looking forward to playing with my amazing teammates in front of the beautiful crowd we have here at Surrey Sports Park”, she said in response to her new contract.

Head Coach Mikki Austin commented; “Resigning Proscovia Peace to represent Surrey Storm into 2023 was one of, if not, the most critical pieces to our puzzle.

“She was formidable last season, showcasing her world-class ability on and off the netball court and at times, was simply unplayable.

“We are thrilled that Peace will continue in our club colors, and we look forward to building on the inroads made as well as her league-leading goal tally”.

Peace Proscovia whose contract has been extended up to the next year 2023 had the highest goals during the last Netball Super League season.

Surrey Storm, Proscovia’s club, finished seventh out of eleven teams with 1088 goals, 853 of which were scored by Uganda’s darling Peace Proscovia.

Her performance and tactics were outstanding as she dominated the 2022 Netball Super league with 94% shooting.

In 2015, she tried to penetrate the United Kingdom professional Netball teams, fortunate enough she secured a trial contract with Loughborough Lightning.

Having showcased exceptionally, Peace Proscovia later In January 2016 re-signed a full contract for the 2016 and 2017 seasons.

The new contract was coupled with enrolment in Master of Science at Loughborough University of School of Business and Economics.

Uganda’s sharpshooter Prooscovia who in 2019 played for the Sunshine Coast Lightning team in Australia participated in the recently concluded 2022 Commonwealth games in Birmingham.

While representing Uganda at the 2022 Commonwealth games, the shooter specialist Proscovia performed that saw her Home Country finish in 5th place.

Meanwhile, the Surrey Storm giant player is expected to participate in the October 2022 Vitality Netball International series in preparation for the 2023 Netball World Cup.